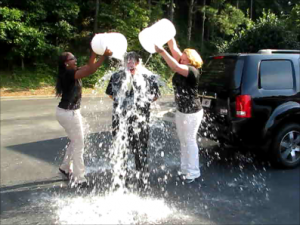 ALS Ice Bucket Challenge- Head Hunters Lice Removal Specialist was challenged to do the #IceBucketChallenge. We challenged Maria Botham President and CEO of Hair Fairies, Carol Gilbert owner of Fairy LiceMothers and State School Superintendent Dr. John Barge. They had 24 hours to accept the challenge or donate $100 to the ALS.

The Ice Bucket Challenge is in honor of ALS awareness. Amyotrophic Lateral Sclerosis (ALS), is the lethal neurodegenerative disorder also known as Lou Gehrig’s disease. Approximately 5,600 people in the U.S. are diagnosed with ALS each year and it is estimated that as many as 30,000 Americans may have the disease at any given time.

It is our company’s mission to help our community and we decided to donate to the ALS even though we completed the challenge. We also urged the people that we challenged to “donate anyways”. Before the #ALSIceBucketChallenge went viral only half of America had heard of the disease. From July 29th to August 26th there were $88.5 million in donations made to the ALS.